The Wagyū Olympics are held every 5 years in Japan.

What is Wagyū? That’s the first question.

The word Wagyū is written with the following kanji “和牛“, 和 meaning in this case “Japanese-style” and 牛 meaning “beef”. So, wagyū simply means Japanese beef. The breed for wagyū is called Kuroge (黒毛) which means “black hair,” so the cows are black, just as you guessed. 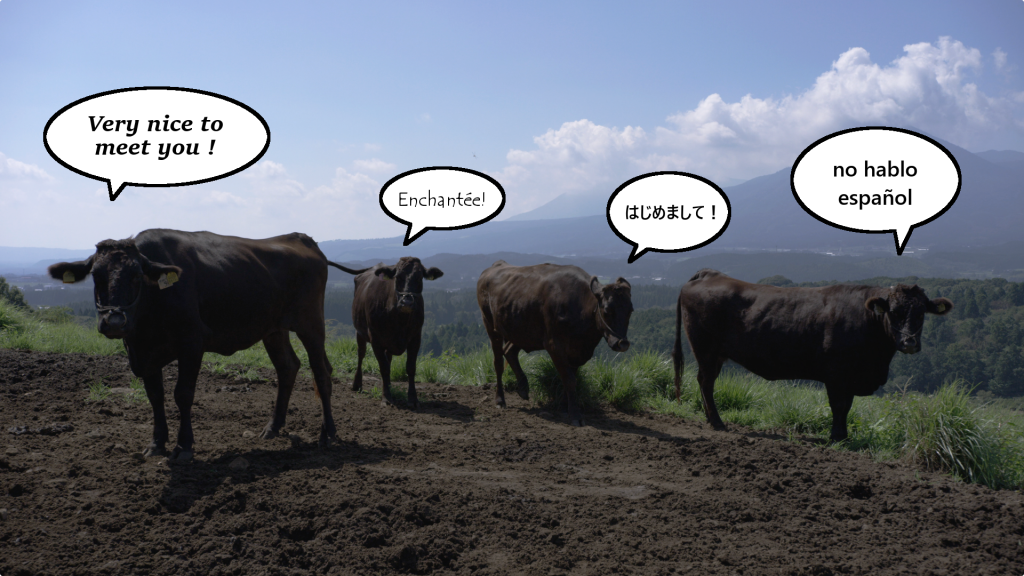 The word wagyū is not used much outside of Japan (as far as I remember) and therefore when trying to explain what type of beef it is, I often have to refer to the famous Kobe beef. Which breaks my heart. Not that I don’t like Kobe beef, of course, it’s just that it kind of became the only brand representing all Japanese beef, just like “Kleenex” has become a generic term for paper tissue.

It’s quite clever of the Kobe beef brand, though, because everyone has already heard of Kobe beef and often considers this is the best beef in the world (or at least in Japan).

Next question: What are the Wagyū Olympics?

The Wagyū Olympics are Japan’s biggest competion for cattle breeders to crown the best cattle in Japan. And the best beef. Anything cow.

Most important question: what beef should you taste during your stay in Japan?

The Wagyū Olympics are here to help you in your quest for the Holy Beef Grail!

The Wagyū Olympics: How do they work?

The 2017 Olympics were held in Miyagi. This was the 11th edition.

39 prefectures (of 47 in total) participated.

Before the competition, every prefecture selects its own representatives to compete in all kind of categories (we will talk about it just a little bit later) in order to become the best beef in Japan. So basically, the winner is necessarily a prefecture, neither a city nor a brand. Let’s use the example of Kobe beef again: Kobe beef is a brand. Therefore, it would not be able to participate in the competition by itself. Kobe beef would have to compete as part of Hyogo Prefecture.

Finally, just like the in the regular Olympics, you simply add up the number (and type) of medals obtained in the different categories and the highest total score determines the winner.

May I add some of my own insights？ (Yes of course!):  Some prefectures will decide to participate in only some specific categories, but then they won’t appear on the general ranking and won’t be able to stand on the final podium.

Now, let’s take a look at those categories（区）:

Checking outside look from three cows (male or female, 17 to 24 months old)

To put it in simple terms (and also because my abilities in English have a limit), the categories 1 to 6 are focusing the cow itself (and the bull for the category 1): its look, its shape, its beauty, its lineage, its fertility, and what amazing calves it could give birth to. The categories 7, 8 and 9 are about the meat itself. For example, the fat quality, how marbled the meat is, how it would melt in your mouth, etc.

I think it is important to say that there is no tasting during those Olympics, the meat is checked with different devices that obtain all the necessary information (ex: the level of good fat, bad fat… if good fat actually exists ಠ_ಠ)

Well, I won’t make you wait any longer, here is the final podium ladies and gentlemen! : 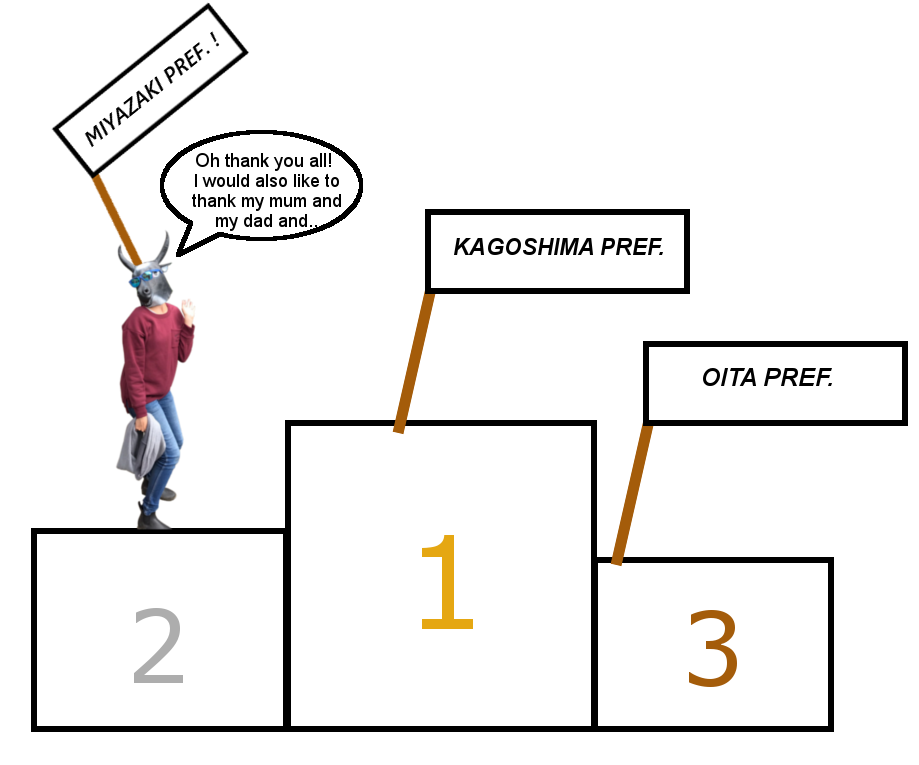 What do those prefectures have in common? They are all located on Kyushu island.

So, if you want to taste the best Japanese beef, you better go south 😉 (and I swear you, you won’t regret it!)

But… Who actually has the best beef?

In a strictly beef consumer point of view, the important categories would be 7, 8 and 9.

Miyazaki Prefecture came out victorious on category 7 and 8 and received the most honorific best-taste prize: the 内閣総理大臣賞 that we can translate (literally) by the “Prime Minister’s Award”. Finally, Kagoshima took the gold medal on category 9.

I’m sure you see me coming with all my references to Miyazaki (yes, I am a big fan of my prefecture of adoption) but here is the thing: Miyazaki Prefecture won the Olympics 2 times in a row in 2007 and in 2012, which was a historic record. Also, for the third time in a row it received the “Prime Minister’s Award”.

During this 11th edition, by winning 2 out of 3 meat quality categories and by receiving the most honorific best meat prize, Miyazaki beef IS the best-tasting beef in Japan.

I mean, just look at that: 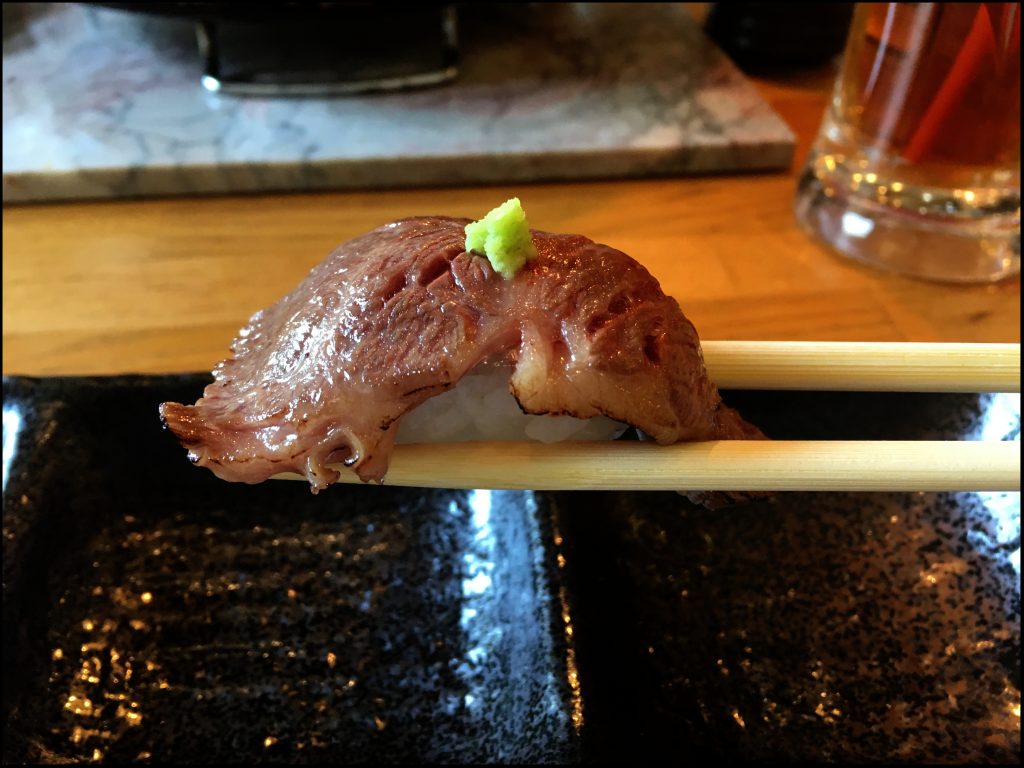 I am using the term “best-tasting beef”, as the “best beef” would belong to the Olympics’ winner, Kagoshima prefecture (you see, I am fair).

It seems that neither Kobe Beef nor Matsuzaka beef participated in those Olympics. Therefore, it’s impossible to compare them. It is impossible to affirm that it is the best beef in Japan. We can imagine a ton of reasons for this choice. Maybe they don’t need to participate since their brands are renowned throughout the world. Maybe the risk to see their brand image suffer from a bad result can also explain this choice. Again, I’m simply guessing.

Why is there so much false information about Wagyū?

I have done lots of research, asking breeders lots of questions to be able to write this article and I noticed there is lots of wrong information on many websites or blogs. The thing is, those Olympics are very complicated to fully understand as there are many sub-categories such as, for example, the “fat quality category”. The winner of one sub-category is not necessarily the winner of the whole category but it allows people to say “we have the best beef in Japan”, without specifying anything. Basically every prefecture that came out victorious in one category or sub category uses the “日本一“ = “Our beef is number one” even if they won the “most beautiful black hairs” category (I just made up this category, I’m pretty sure it doesn’t exist).

To make sure that people stay clueless or misinformed about Japanese beef, international media (or at least French media) are also doing their best. I remember watching documentaries about Japanese beef and being amazed by the idea of feeding cows with beer and giving them massages. It was put as if all cattle were raised with this method, like an unbendable rule to raise TRUE Japanese beef.

Actually, this method is used only by Matsuzaka Beef brand. Its Wikipedia page is, of course, affirming that this is one of the “three big beefs” (whatever that means) within Japan. The French version is even better, saying this is one of the three best beef brands in Japan with… Kobe Beef. (ﾉಥДಥ)ﾉ︵┻━┻･/ (← throwing my desk out of anger!)

I think the problem is also that the Wagyū Olympics are not promoted well enough. Even though this is the biggest national event about Wagyū, hardly anyone outside of Japan has heard of it. And again, no one is controlling the terms used by each prefecture when promoting their own meat. When you travel around Japan, everyone claims to feature the best beef in the world.

However, do not worry. If you come to Japan and actually try a Wagyu meal, there is no way you will be disappointed.

But if you want to shed tears of joy because you’re savouring the best-tasting meat in Japan melting in your mouth, then you should come to Miyazaki prefecture. And if I may add a little piece of information to this already very long article, you should come to Kobayashi City. Indeed, the cows that won the meat categories for Miyazaki Prefecture are actually from Kobayashi! I know, it’s amazing right!? Yeah, Kobayashi is simply amazing.

Between two meals, you can also marvel at the beauty of Miyazaki prefecture’s picturesque landscape, visit hidden temples and shrines, relax in an onsen…What an unforgettable experience!

Well, I hope you enjoyed reading this article about the Wagyū Olympics.

If you have any questions or comments, please feel free to contact us 😊

Last note (I promise): I also read on the internet that cows are slaughtered right after the Olympics to make meat out of it. This is complete nonsense. Once the Olympics are done, the meat that won the best prize is sold to the highest bidder (approximately 50 million yens!) but the cows remain untouched. Indeed, the idea is to buy promising bulls and cows (from the category 1 to 6) to then breed the best calves possible. Slaughtering them right away would just be silly.

Overall results for each category (English):

The official results of Miyazaki and Kagoshima prefectures (in Japanese only):